The results are in! How we measure progress in PEPY English Classes

The results are in! How we measure progress in PEPY English Classes

PEPY has been teaching English in Chanleas Dai since 2005. While the subsequent years of experience have shown us that often it is students’ Khmer literacy skills that need the most support, it cannot be denied that in order to access resources online, and with ASEAN integration on the horizon, knowing how to communicate in English is an extremely beneficial skill for Cambodian youth.

To track the effectiveness of PEPY’s supplemental English Class projects, Chim Seng conducts monthly tests to monitor the students’ progress. In October all students complete a ‘Pre-test’ to see what their level of aptitude is at the start of the academic year. This same test is given in June to mark the overall yearly progression of students and to assess the effectiveness of the program itself.

What the tests show: 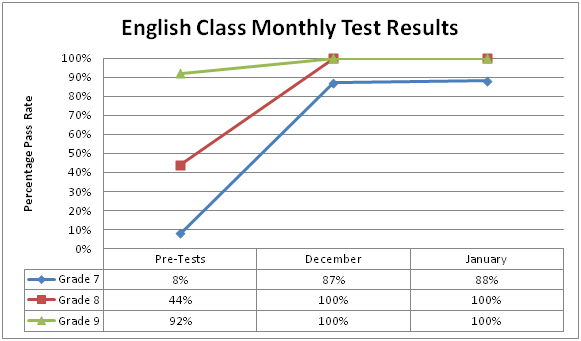 Since the Pre-tests, there has been a dramatic rise in the number of students passing the monthly tests. Grade 7 has improved significantly. As this is the first time they have attended the PEPY supplemental classes, the chart suggests the effectiveness of the classes in these early stages. There is also an increase in the pass rate for Grades 8 and 9, however it is less dramatic. These students have been involved in the lessons for up to two years now and so the improvements, whilst ongoing, are more subtle.

These tests not only help the program staff monitor the students’ knowledge, but also give the students a goal to work towards. As Seng says, “The goal of the tests is to encourage the students to learn”. As students can see how well they are doing in the classes and how far they have come from the beginning of the year, the tests motivate them to try that extra bit harder to beat what they scored in previous months. 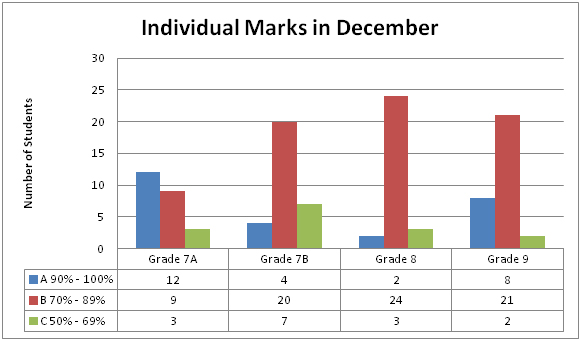 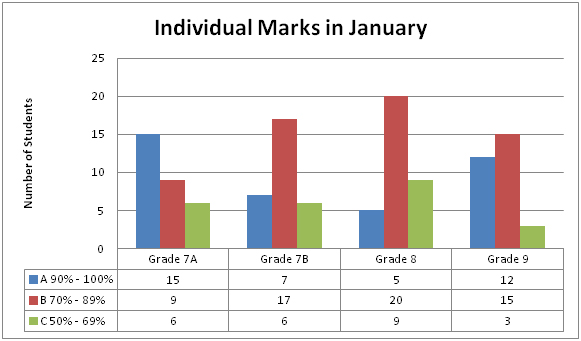 As you can see from the charts, not only has the pass rate greatly increased since the Pre-tests, the number of students gaining a B or above has also increased, showing a constant level of improvement from the students.

It isn’t just the students that appreciate the encouragement; the Pre-tests give PEPY’s facilitators a guideline as to a student’s aptitude and the rate in which they should progress in the class. If certain students are underperforming, it indicates needs to refresh lesson plans and change approaches in learning strategies: “It also helps to improve our teaching!” says Seng. As with all PEPY projects, it’s important for our team to learn from the students in terms of improving our projects, as well as being crucial for the students to develop through PEPY classes.