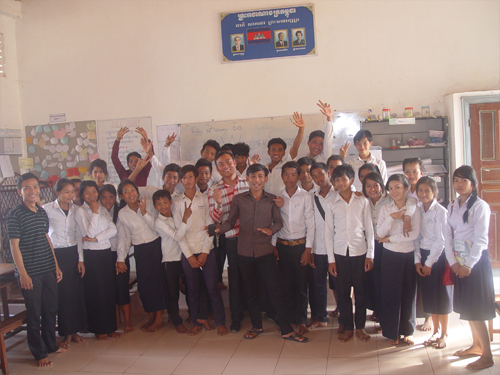 Have you ever thought about sharing knowledge and any experience to other people in your community? If so what would talk about?

For students in Kralanh, these are great questions. So on Friday 22nd February at Chanleas Dai Junior High School, three PEPY staff members, An Em, Chhoem Rithy and Hem Saly, organized a Sharing Event for students. Over 30 students from grade 9 attended. The speaker was Mr Thor Barang, who was born in Chanleas Dai commune but now works at Silk Screen Printing Lab Siem Reap. Mr Barang is also a 2nd year student in Build Bright University.

The event aim was to share the knowledge and experiences to students as the key for them to avoid dropping out of school. Mr Barang also shared the challenges he met and how he solved problems when he’s studying in grade 12 up to now.

As to what challenges Mr. Barang met during and after high school, he failed the national examination and so was forced with his family to work in Thailand. It was a very serious life for him. He found bad friends and they encouraged him to do other things while he studied in grade 12. He avoided going to school, used learning time to play games; he played volleyball, football and was doing other things beside of studying. However, now he also has remorse with the things which happen in the past.

Mr Barang also talked to students about commitment and gave some advice such as, “please do not do like I’ve done in the past. Please try to achieve your goal without interruption. Whatever you want it will happen after you meet the goal.” He’s hopeful in the future in his commune and in our country, that there will be an increase in human resources, and hopefully people in his commune can stand like him today.