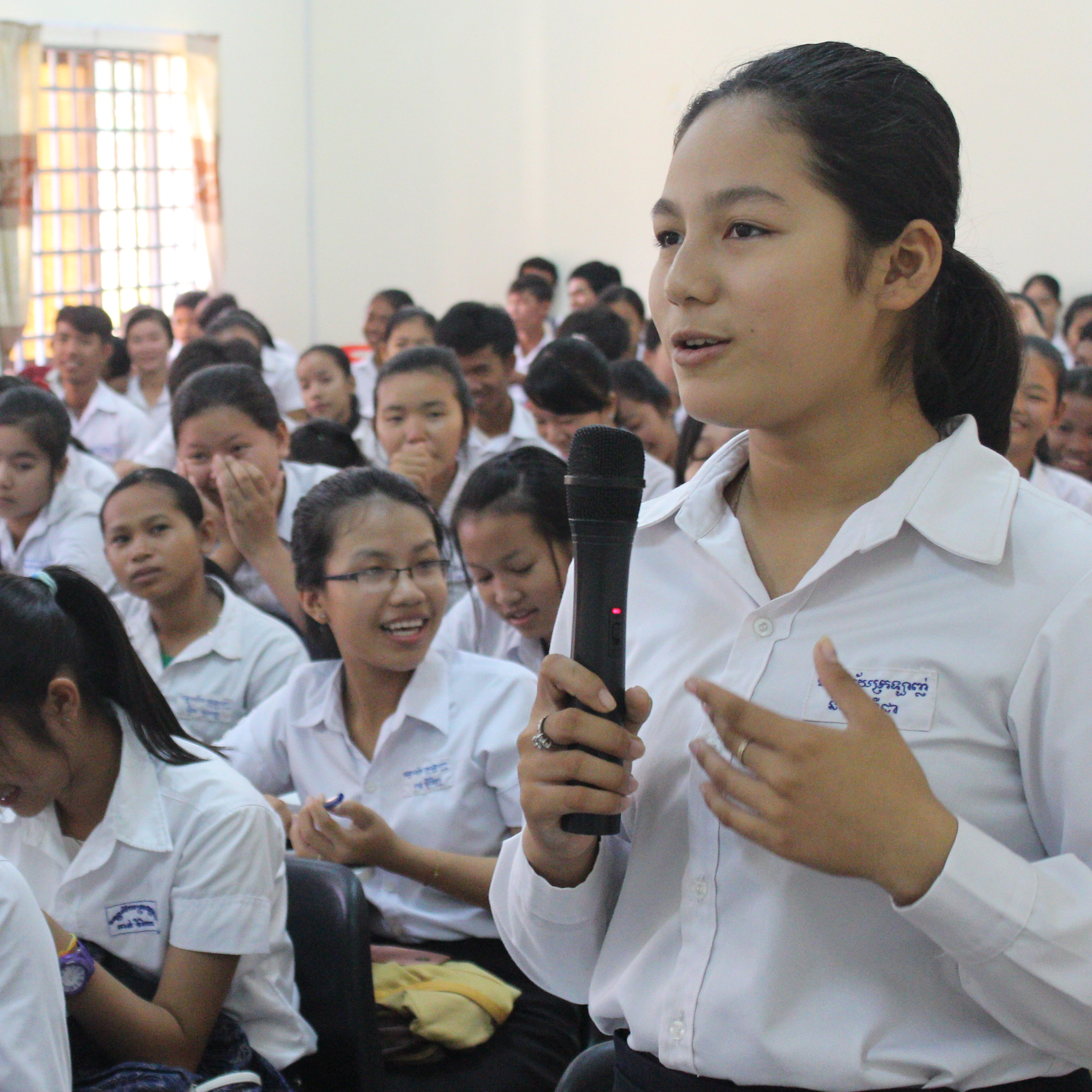 On Saturday 23 January, PEPY Empowering Youth staff and students in Siem Reap traveled out to Kralanh High School for the first Sharing Event of 2016. We were joined by three special guest speakers –Yi Sokhmean, Cho Choch and Lim Virya – who kindly gave their time on Saturday morning to tell attendees about the experiences they had while pursuing their dreams. Around 180 students from grades 10, 11 and 12 and 10 teachers from the high school, as well as the PEPY Empowering Youth Scholarship students, came to hear about the challenges and successes that speakers have encountered on the path which has led them to where they are today.

Yi Sokhmean is currently studying to be an electrician, which is anything but the typical career path for a girl from rural Cambodia. She described in detail the particular difficulties she has had to face in the pursuit of her goal, but her strength and resilience was a real inspiration to the students, female and male alike. Although the number of girls graduating from primary school and the literacy rate among females are both increasing in Cambodia, there is still a disparity between the numbers of boys and girls in secondary and tertiary education. There are various reasons for this trend, such as the traditional tendency for Cambodian women to marry and start a family at a relatively young age, particularly in rural areas. Sokhmean is testament to the fact that if, as a young female, you have aspirations that go against the grain, with the right amount of determination and desire, these aspirations really can be achieved.

The second speaker, Cho, has been working with PEPY for many years and in that time, h

e has been involved in various projects and jobs, all of which have had their own particular impact on his life and career. During his presentation at the Sharing Event, Cho focused on the theme of following your dreams. He stressed the importance of having a goal and, once you have one, giving that goal 100% (and more) of your effort and commitment. He made sure to get the students involved in his presentation by asking them to write down their dreams and then share some of them with the other attendees. It was certainly a daunting task to get up and tell 100 other people about such a personal thing, but it was great to see the students take to the task with real enthusiasm. It is sometimes difficult for students from rural areas to identify their dreams and understand that they really are achievable, but Cho is living proof that if you know what you want, there’s nothing to stop you from getting it!

The final guest speaker was Lim Virya, a teacher at Build Bright University in Siem Reap and owner of her own real estate business. The focus of her presentation was different again to the other two guest speakers, which helped make this Sharing Event extremely varied and interesting. Virya told the students about her own personal recipe for success, which included a number of points that may not always be referred to when discussing the academic or vocational side of success, but are of great important nonetheless. She spoke about the significance of seemingly simple things, like smiling and not discriminating against people with disabilities, and how these can make a real difference 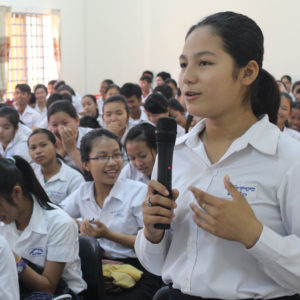 when making your way in the world. The fact that Virya has been able to achieve great success in both areas of her work is a real credit to her and proof that the points she presented on Saturday really do work. The students derived immense enjoyment from her lively presentation and, similar to Cho and Sokhmean, her words were incredibly inspirational.

It wasn’t only Sokhmean, Cho and Virya who shared their experiences at the event: a number of students from the high school bravely got up in front of their peers and spoke about a number of important topics, such as realizing your dreams and setting goals for yourself. A group of students also presented a piece of devised theater about a boy who had very different aims for his life than his parents. While there were many comedic aspects of the piece, the underlying message was more serious and very in-keeping with the theme of the day: if you have a dream, have the courage and self-belief to go for it! Hearing their peers share their experiences and hopes for the future was a vital element of Saturday’s event for the students, as it encourages them to discuss such topics among themselves after the event, and to motivate each other to keep working towards what they ultimately hope to achieve in the future. By promoting this culture of sharing, it creates a positive, healthy and very hopeful environment for young Cambodians who otherwise may not feel confident to talk about their dreams with their friends.

The whole event was incredibly enriching for the students from Kralanh High School, the Scholarship students, as well as the PEPY Empowering Youth staff. We hope to repeat the success of the Sharing Event in the future and would like to say a massive thank you to Sokhmean, Cho and Virya for taking time out of their busy schedules to come and speak in Kralanh on Saturday.