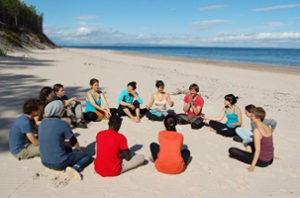 PY Empowering Youth’s Finance and Admin Manager, Konnitha, traveled to Scotland for ten days. She embarked upon the trip as part of the Findhorn Foundation’s School of Youth program. The Findhorn Foundation is a holistic learning center which holds the aim of inspiring and encouraging a ‘transformation in human consciousness, to help create a positive future for humanity and our planet.’ Their School of Youth initiative blends ‘outdoor adventures with music, art and philosophy, the program is highly innovative, developing life-skills related to peace, sustainability, entrepreneurship and human flourishing’.

After their long journeys, the participants’ first day of the retreat was spent relaxing and getting t

o know one another. On day two of the retreat, the group took a tour of The Park before partaking in rock climbing. When first presented with the sight of the cliff which she was being asked to climb, Konnitha says she felt very nervous, and the prospect of scaling its face was one which she found to be extremely daunting. However, the courage and determination of her fellow participants encouraged her to follow suit, and she was reassured by the support of the course facilitators. Upon completing the climb, participants were provided the opportunity to reflect on the experience, and despite having only been there a day, Konnitha describes how she became very emotional as she contemplated where she was; she says that she was overwhelmed by how happy and lucky she felt to be granted such an opportunity, and how her dream of becoming the first of her family to see the world was coming true.

In addition to rock

climbing, the group completed a number of adrenaline-inducing, outdoor activities over the duration of their trip; this included a challenging, hike into the mountains, which left Konnitha aching and dizzy from the steep incline, but also rewarded her with a great sense of accomplishment and pride in her perseverance. In order to fulfill the sustainability aspect of the retreat, the participants engaged in a number of agriculture-themed activities throughout their time at the Findhorn Foundation; they collected grass, completed gardening tasks on the farm and picked fruits, such as raspberries. There was also an opportunity for the group to explore ‘Conflict and Peace’, during which time members of the Royal Air Force shared stories of their experiences.

On the sixth day of the trip, the group experienced the 24hour Wilderness Solo; each participant was required to spend 24 hours alone on either the beach, or in the forest, equipped with a tent, sleeping bag and minimal food, and, for Konnitha, this proved to be one of the most challenging experiences of the trip. Konnitha chose to set up camp on the beach in an effort to avoid the insect inhabitants of the forest. She utilized the quiet and solitude of the first few hours to reflect, however, as nightfall approached, Konnitha felt increasingly fearful. With a leaking tent in windy conditions, Konnitha says she felt extremely cold and unmotivated. However, despite being presented with the offer of leaving the Solo, Konnitha was encouraged by the support of her facilitator and proceeded to face her fears, successfully completing the 24 hours. Upon completion, the Solo became a great a source of pride for Konnitha, and when she looks back on it now, she expresses that the experience taught her a number of important lessons, which she will carry into her life; she now has a greater understanding of the importance of taking personal time to reflect, as well as taking inspiration from other participants’ experiences and recognizing the significance of not putting too much pressure on yourself.

As this was her first time traveling alone, and to a new continent, it is understandable that Konnitha found certain aspects of the trip challenging at times; the cold and windy weather of Scotland was a huge change from that of Cambodia, which resu

lted in Konnitha getting ill. In addition to this, being away from her family for the first time left her feeling lonely and homesick. However, Konnitha identifies these challenges as character building opportunities and believes them to have made her stronger as a person.

Konnitha is not only grateful for the opportunity to have traveled to the ‘very beautiful’ Scotland to take part in such a wonderful experience, but also for the opportunity to have met a group of new people; exchanging life stories and experiences with people from a variety of countries and backgrounds allowed her an insight into different ways of life and cultures, and has broadened her outlook. On behalf of Konnitha and everyone at PEPY Empowering Youth, we would like to say a big thank you to the Findhorn Foundation’s School of Youth for presenting the opportunity to be involved in such a fantastic experience, and for assisting with Konnitha’s travel expenses.

Watch the video below to see more from Konnitha’s trip.