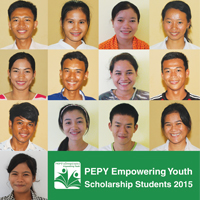 welcomed a new promotion of Scholarship Students to PEPY Empowering Youth. To help them settle into life, both at PEPY and in Siem Reap, we held an Integration Week; the week was led by Scholarship Officer, Channa, and Dream Management Officer, Savoeng. As scholarship students themselves, both Savoeng and Channa, have both been through the process of moving to Siem Reap and joining the scholarship program, meaning that they were in a perfect position to guide the new students through their integration week.

Over the course of the week, through a series of presentations, PEPY Empowering Youth staff introduced the new students to the ICT and Youth Empowerment curriculum that they will be studying over the coming year. In addition to this, there was a presentation about the English classes at ACE that the students will be attending and staff spoke in depth about the vocational training that students will be embarking upon to give them a greater understanding of their studies.

The transition from high school student to PEPY scholarship student is not only a big change academically, but also personally; students move away from their families in the rural area of Kralanh to the city of Siem Reap to live with fellow PEPY scholarship students. We are aware that this can often be a culture shock to the students and that they may be met with experiences of which they have never been previously

exposed to. Therefore, a large proportion of the integration week is dedicated to familiarizing the students with Siem Reap and exposing them to some of the situations that they may be initially confused by. For example, on their first day of integration, Mealea, our Accounting and Admin Assistant, spoke to the students about traffic lights and signals to ensure their safety when crossings roads. During the week, students were also aided with the formalities of opening bank accounts and orientated about the local shops and markets.

The week also consisted of a number of activities and games, the aim of which was for students to become acquainted with one another, as well as with PEPY Empowering Youth staff; students visited Angkor Wat Putt to play Mini-golf, engaged in the ‘Hula Hoop’ team building game and played ‘Jek Jouch bong Kla’ amongst many other exercises. The students were also provided the opportunity to express any concerns or worries they had over the transition, and PEPY staff worked with students to address and deal with any issues that arose during these discussions.

We are delighted to have welcomed the new promotion of scholarship students to PEPY Empowering Youth and look forward to sharing more of their news with you in the future.