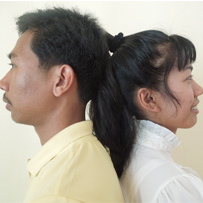 PEPY staff recently took part in a thought-provoking training day on gender. We learned about the differences between sex and gender, explored cultural differences in opinions of gender, discovered eye-opening facts on inequalities, and challenged ourselves through engaging activities.

All this talk of gender got our team thinking about gender-based issues close to home. Whilst many of us knew about the vast gender gaps occurring in many parts of Cambodian life, we were eager to learn more!

According to the World Economic Forum’s 2013 Gender Gap Index, Cambodia ranked poorly, coming in at position 104 out of 136 countries. This represents big gender inequalities across a range of areas including economics, education, health and politics.

a) Gender in Education

In Cambodia, we see evidence of the gender gap in education. Around 29% of females are illiterate (UNESCO, 2011) and only 11% of girls remain enrolled in school come upper high school level (Asia Foundation).

Luckily, there’s been a recent increase in ‘girl power’ movements to encourage equal rights in education, including the Her Turn initiative that PEPY partnered with in 2013.

b) Gender in Employment

For Cambodia, one of its great success stories is apparent gender equality in employment. Unlike many developing nations, Cambodia has a very high percentage of women in the workforce. Around 72% of young females are in employment in Cambodia (World Bank Indicators).

However, one only has to glance around and see that a majority of garment factory employees are female, or do not commonly appear in many high level government positions. In fact, in 2011 it was recorded that for every 100 men in parliament there were just 27 females. Moreover, not a single female head of state exists in Cambodia.

One of the biggest challenges we face in the education programs we operate, is pressures in the domestic setting. Many of the young people we work with face challenges to stay in education because family ties pull them to other commitments. We find this occurs in both males and females, but with pressures on boys to gain employment more common, and girls to get married young more likely.